A lovely walk, nearly 10 km in length which starts by going through the farmland at the southern foot of the Chart, then crosses through Squerryes Park and finally returns to the Carpenters Arms through the woods of the High Chart. Can be muddy if ground conditions are wet. Also, it would be easy to pop into Westerham for refreshments and a rest if needed.

Walk by the edge of the grounds of Trevereux House past the lake. At the corner of the grounds and before a large tree make a sharp left turn and head in an easterly direction across a number of fields. The path eventually comes out in a little lane on the edge of Crockham near a Japanese looking house. Follow the lane into Crockham Hill, at a T Junction take a left and follow that road for a short way to the main road. Cross the road and walk up the hill for a short way and turn right down a lane to Crockham Hill CofE Primary School and the Church.

Follow the lane and where the lane turns up the hill towards the Church carry straight on through a gate and into a picnic area.

Keep going in the same direction gaining a little bit of height as you go along. [The map shows a path going down the hill and over a stile into the lane at the foot of the field - ignore this stile.] The path crosses a stile and  a bridge over a stream. Carry on across another field and you come to some steep steps up to Froghole. At the top of the steps turn left. Take a few minutes to look back across the fields that you have come and enjoy the view! 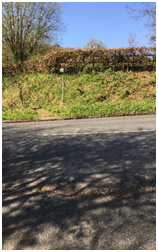 At the top of the steps turn left and follw the lane up the hill until it meets Hosey Common Road (B2026). Cross straight over the road and follow the footpath opposite.

Follow the path and after about 150m at a junction of paths take the path on the right which follows the edge of the wood. The path joins another path coming in from the left and at a wooden bench where there is also some cast iron garden furniture, turn left. The track winds its way through the woods and in places can be muddy.

Continue in a general northerly direction and at a kissing gate go through it and walk along the left hand side of the field.

At the end of the field you cross a stile and turn right down a track. After a short time cross another stile on the left and walk down the valley towards Westerham besides River Darent through Squerryes Park. Just before Westerham and a cottage take a sharp turn left up the hill.Follow the path up the hill and across a field. Go straight across a track and into some woods.

Go through the woods and after a short time take a path on the right and follow the northerly edge of the woods. Keep in the same direction across a road. Eventually there is a sharp bend – turn the corner (ignore the path that comes in from the left and joins on the apex) and take the next path on the left. You are now travelling in the same direction that you have been for the last mile or so but just  metres further north. You are now on a forestry road with younger planted trees fenced in on the left.

Follow this track passing a pond on the right which the Ordinance Survey map shows as a spring. Keep on the same track and you pass a National Trust sign and shortly after the path forks, follow the left fork.

Keep going in the same general direction ignoring paths off to the left or right. Where two major paths cross there is a reasurring GW post pointing the way.

After the second GW post the path forks. Take the left hand fork.

Follow the path as it winds through the trees and soon a bigger path joins from the left. Turn right and follow this path ignoring tracks off to the right to the edge of the woods and Limpsfield Chart. When the path meets a road, cross it and walk down the road opposite to the Carpenters Arms.

This walk has also been published on Viewranger and its' coordinates can be downloaded from there.

Take a look and see what's on the menu: whether you're after Sunday lunch, coffee and cake or a light snack, we have something to suit all appetites.

Our chef works with the seasons to produce menus full of flavour, and we're proud to source our produce locally where we can.

Read more about the award-winning ales and lagers you'll find on our bar, made just down the road by Westerham Brewery. Discover how Robert Wicks revived Westerham's rich brewing heritage when he opening the brewery in 2004 and read about some of our most popular beers, including British Bulldog, Finchcocks Original and Summer Perle.